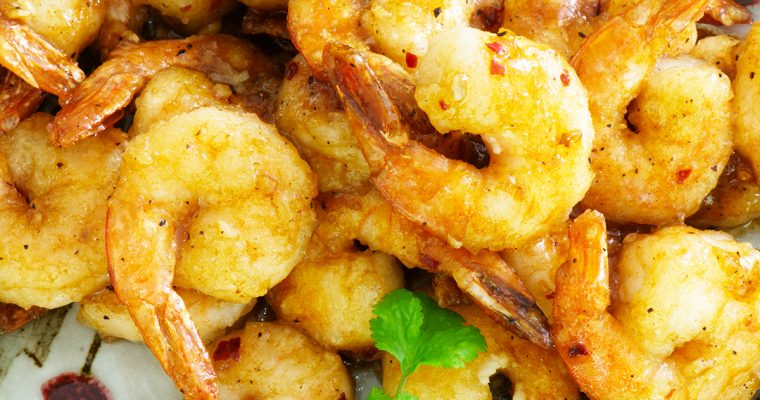 How do we love shrimp? Let us count the ways. There’s Green Curry, Salt Baked, Coconut, Spicy Salads, Noodles.…you get the drift. But when I want an easy appetizer that is sure to wow people, I reach for this Tamarind Shrimp. It’s super fast but read more 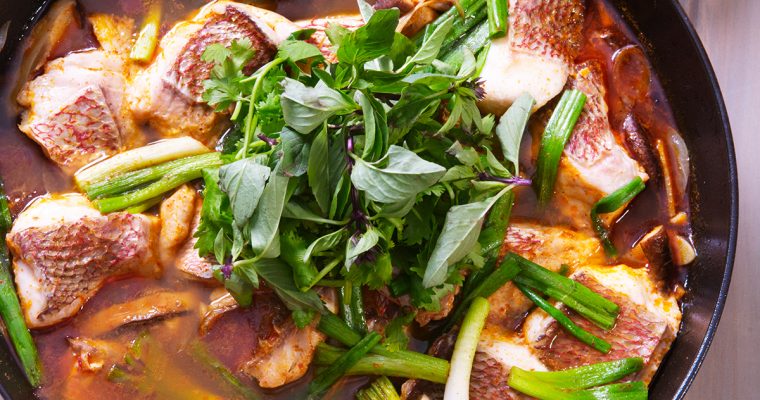 Thai food is famed for expertly balancing all of the major flavors-spicy, sweet, sour, and salty, in a dish. And this Spicy Thai Fish is no exception. A whole snapper is used here: bathed in a fragrant, spicy broth with onions and earthy mushrooms and read more 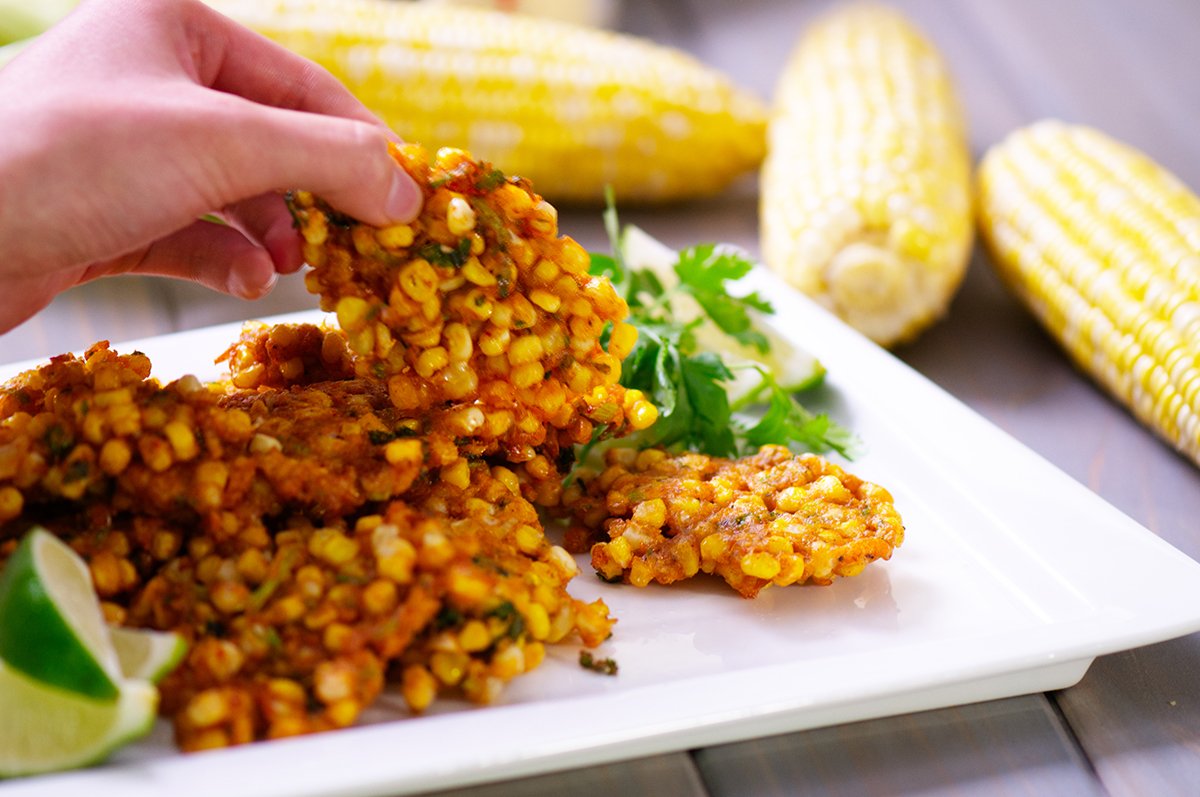 Everyone loves corn fritters. That’s just an undeniable fact. I’m sure every culture has their own version. But I am really partial to Thai Corn Fritters, known as tod man khao pod. The addition of red curry paste for a bit of heat and a squirt of fish sauce for a drop of funk really takes this favorite treat to another level. My version of these corn fritters has very little batter, allowing each bite to be full of corny goodness.

These fritters are a popular street food in Thailand and you can see vendors frying these up on the street and in kiosks with big vats of oil. The rich scent of corn and the spices create a heady perfume that is hard to resist.

I recommend frying and eating them casually, maybe as friends congregate in the kitchen with some cold drinks. Otherwise, keep them hot in a low oven while you finish frying and serve them on a platter. Pro-tip: make sure to snag yourself a few before serving. I have made platters of these for parties before and they have disappeared before I could eat a single one. Corn is a highlight of summer. And while we can get it all year round, I only make these fritters when corn is in season and at its sweetest. Look for corn that is plump and has a bright green, fitted husk. Avoid any that have brown shriveled husks, or slimy silk coming out of them. And not to give you an “earful”, but fresh corn should be used with a day or two. Otherwise the corn’s sugars turn to starch, and you lose that peak of season sweetness.

Start making the fritters by slicing off the corn kernels. Do it over a large bowl because this can be a messy business. (you can also put the bowl in the sink and do it there so any flying kernels are caught.) Hold the corn up vertically and slice down the corn with a sharp knife. Make sure you do not cut so deeply that you are cutting into the woody corncob, which is unpleasant to eat. If you feel a good amount of resistance as you cut down, you’re probably hitting the core. You can fritter just about anything. Some batter, some veggie, and some oil and voila, you have fritters. Most of them though rely on a lot of binding batter which masks the veggies. Not these though! Just 4 tablespoons each of flour and cornstarch provide enough structure while letting the corn and spices shine.

The red curry paste is just enough to add some flavor and interest to the batter but not so much that it’s spicy. You can add a little more if you prefer a bigger jolt of flavor. Then it’s time to heat the oil. Test that it’s hot enough by dropping in a tiny piece of batter. It should immediately sizzle. Stir the batter again and it’s time to fry. This is a very wet batter, it will spread quite a bit when dropped in the oil. Be very careful to avoid hot splatters. The corn fritters fry up quite quickly, about 2 minutes per side. These corn fritters will disappear as soon as you make them, so plan accordingly. They’re also best eaten hot as they’ll start to lose the nice crispy texture. Any leftovers can be re-heated in an oven at 350 degrees for 5-7 minutes.

They are wonderful served alongside Tropical Ceviche, or devoured as a snack with Lychee Mai Tais. Make them tonight and then take a second to rate and comment on the recipe below. Tag us in your pics @funkyasiankitchen; we love hearing from y0u! 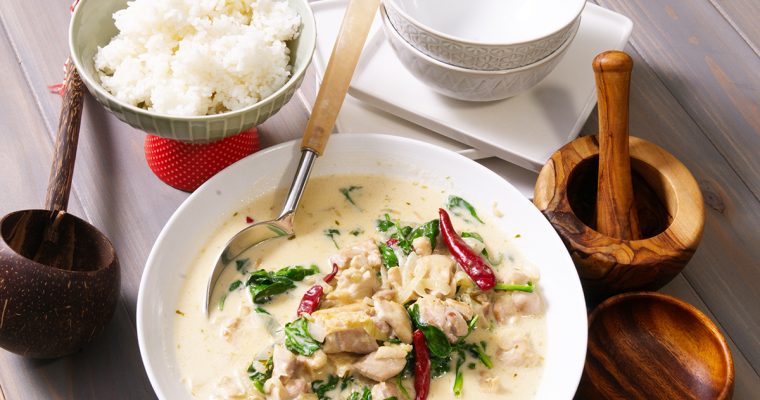 One of our restaurant’s best selling dishes, this Thai Coconut Chicken is redolent with the tastes and smells of a tropical island. Creamy coconut milk, a blast of citrus from lemongrass, and juicy chicken make this an incredibly satisfying dish. And it’s so quick! Served read more 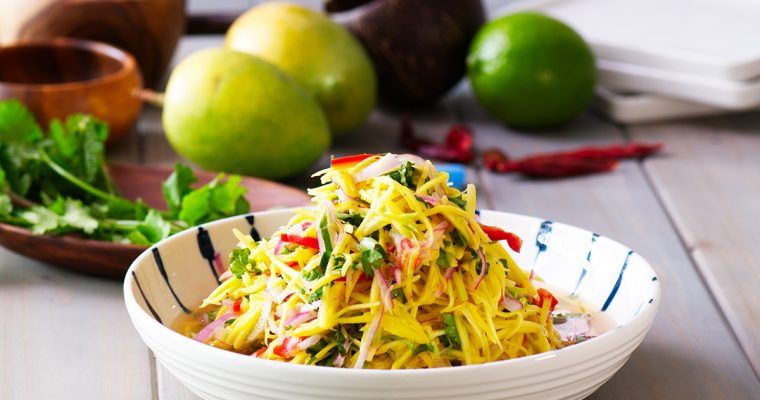 Google just informed me that only two states in the whole country ever search recipes for Green Mango Salad- California and Florida. Which I guess makes sense as they are the two states that grow mangoes, but the rest of you are really missing out! read more 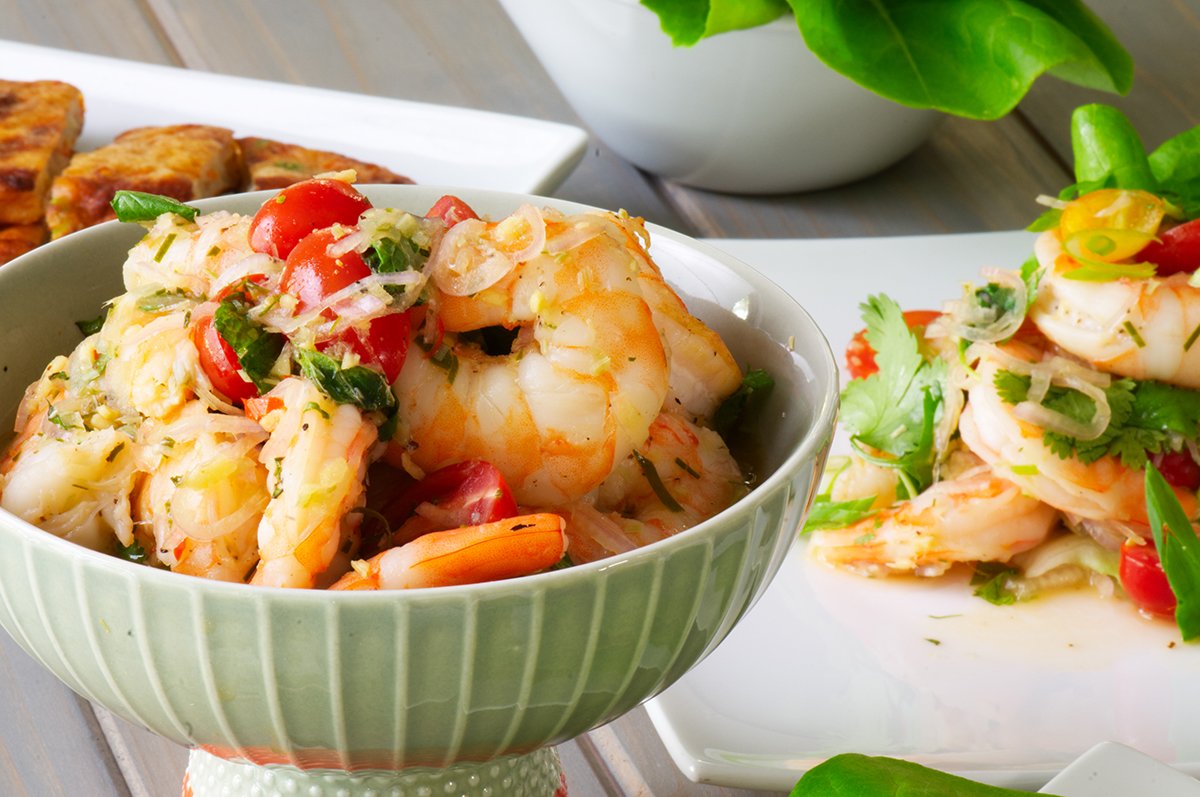 It’s getting to be that time again in Miami. That time when it’s so oppressively hot but you still need to eat. And cook. Thai Shrimp Salad to the rescue! Bright, light, citrusy, and zesty-it’s summertime in a bowl. And best of all, the shrimp requires just a very quick pass under the broiler, leaving a nice cool kitchen. This is a dish I start to crave as soon as it gets hot, and once you try it, you will too. This Shrimp Salad, known as Pla Goong, relies on some traditional Thai ingredients for a very punchy salad. Lemongrass and Kaffir lime leaves amp up the citrusy dressing, fish sauce adds funky depth, and chilis add heat. Counter intuitively, that heat actually helps cool you down. It’s not by accident that the hottest locales have the spiciest cuisines. Fresh herbs, lettuce, and tomato round it all out. This dressing is so insanely good! I could honestly drink it. If you can’t find the frozen tubs of minced lemongrass, which I swear by, you will need to get fresh lemongrass stalks. To prep them, remove the bulbs and the tough outer part of the stalks and mince the more tender green part. Sumo oranges are particularly great this year, really sweet and juicy. If you can find them use that, otherwise a regular orange will be delicious too. Mix the fresh citrus juices, the fish sauce, ginger, lemongrass, and the sugar. Stir until the sugar dissolves. Time For The Shrimp

The shrimp for this cooks so quickly. Just drizzle with some oil, season, and broil for a few minutes, 3-5 depending on the strength of your broiler. Keep a close eye on it, we want perfectly pink and tender shrimp, not tough shrimp that’s been overcooked. Once the shrimp is cool enough to handle, remove the tails. Add the still warm shrimp (including any accumulated juices) to the dressing and gently mix. Mix in the fresh herbs and tomatoes. I like to serve this with a soft lettuce to scoop up the shrimp, but you could also serve it as a more composed salad. Either way, this Thai Shrimp Salad is going to become your it’s hot, I don’t want to cook, summer go-to. (And to really cool you down, try pairing with either Yuzu Margaritas or Lychee Mai Tais) If you try it, let us know. We love hearing from you! Leave a comment and rate the recipe, and of course tag us in your beautiful pictures @funkyasiankitchen.