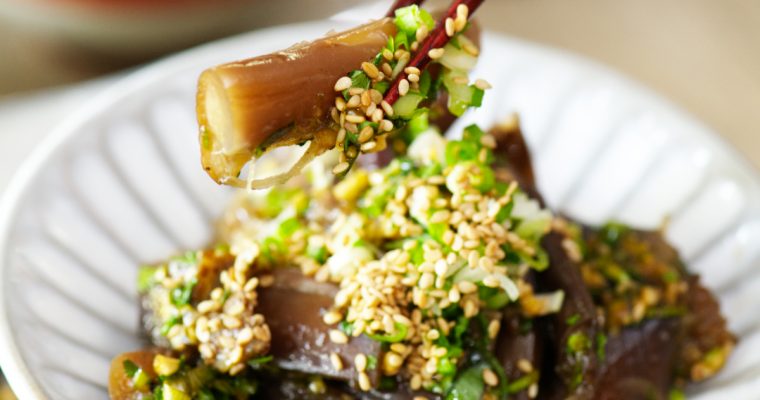 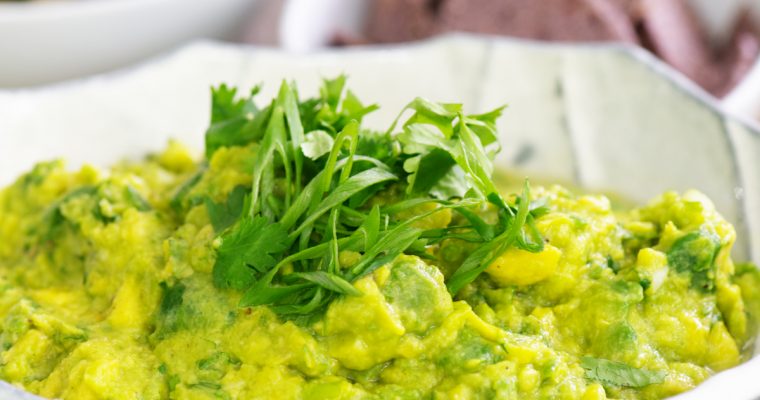 One of my favorite things to do is to take a classic dish and add an unexpected twist. This Spicy Guacamole is an especially fun one. It looks like the regular dip we all love, but one bite and you know this is no ordinary read more 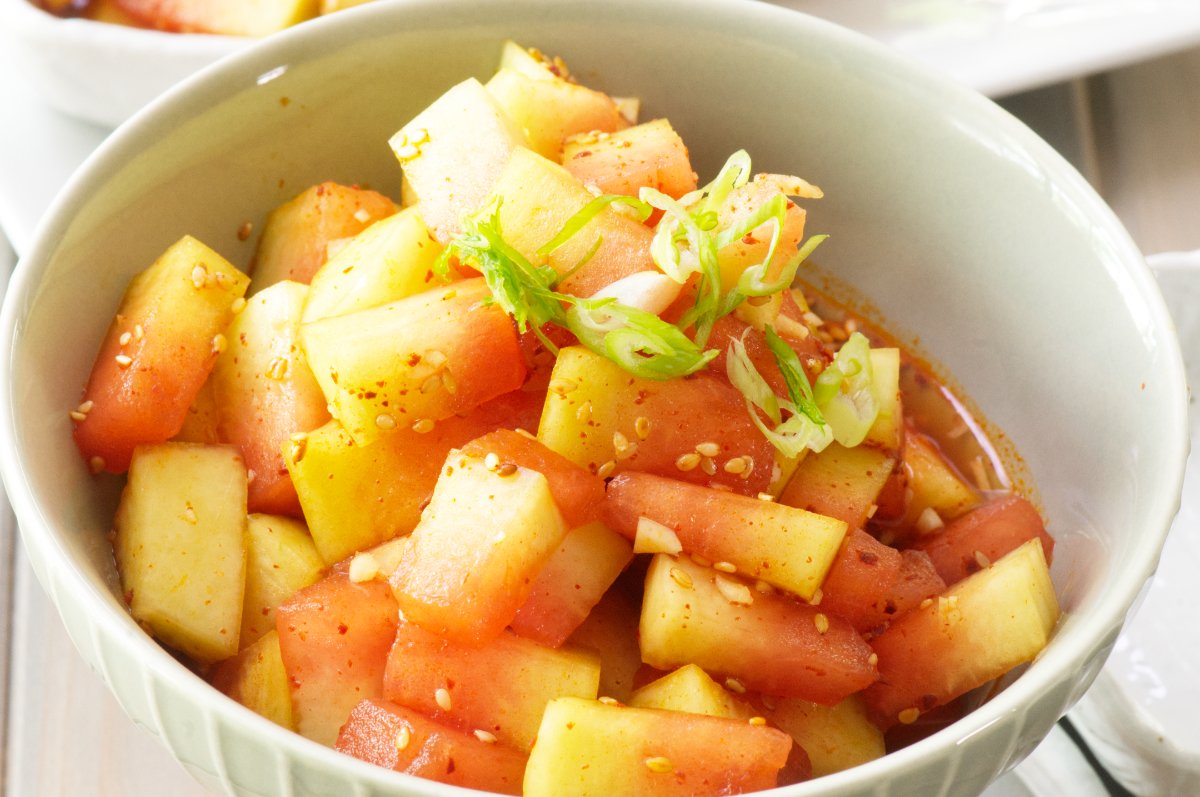 Watermelon Rind Kimchi? Well, I love watermelon. We eat an embarrassing amount in our house. We even used to have watermelon eating contests…and not even as a fun thing to do with our kids. Just me and my husband, don’t judge. But with copious amounts of watermelon, comes copious amounts of watermelon rind. Seeing the inside of the garbage can made me feel a little guilty. So I took some inspiration from the South and came up with this Watermelon Rind Kimchi. This quick crunchy side dish is perfect as an Asian condiment but equally at home on a summer table with BBQ, grilled foods, and other hot weather eats.

So next time you cut up a watermelon, don’t throw out that rind! This Watermelon Rind Kimchi adds bright, spicy sweet flavor to anything it touches. Cutting down on food waste has never been so easy and delicious… Watermelon Rind Pickles are a Southern tradition. They are made in the same way that you might pickle cucumbers- using a salt brine with vinegar and classic pickling spices. My version takes a detour through Korea, adding gochugaru, sesame oil, rice vinegar, and toasted sesame seeds. This is not a traditional kimchi by any means but has many of the same flavors. It’s more like a mashup between kimchi and a pickle. You know how I love a good mashup! I start by prepping the watermelon rind. It’s important to cut enough of the outer skin off so you don’t have tough pieces that are hard to chew. There’s plenty of rind on a watermelon, so don’t be afraid to skin a little more deeply than usual. Also, depending on how much watermelon flesh is left on the rind, your pickle will be a little more sweet or a little more savory. I love the color contrast and I’m also one of those who cuts out only the reddest part of the watermelon, so my rind is always very colorful.

Now it’s time to make the dressing. This is a quick little vinaigrette using familiar ingredients. It shouldn’t take you longer than 5 minutes to whip up. I like to serve this watermelon rind kimchi with anything that could use a little blast of acidity. Try it as a side with some simply grilled fish,  Omusubi Rice Balls or Korean Fried Chicken. Honestly I love to just snack on them right from the fridge, they are so refreshing! Give them a try and let me know what you think. You can rate and comment on the recipe below, and don’t forget to tag us in your beautiful food pictures @funkyasiankitchen, we love seeing your creations! 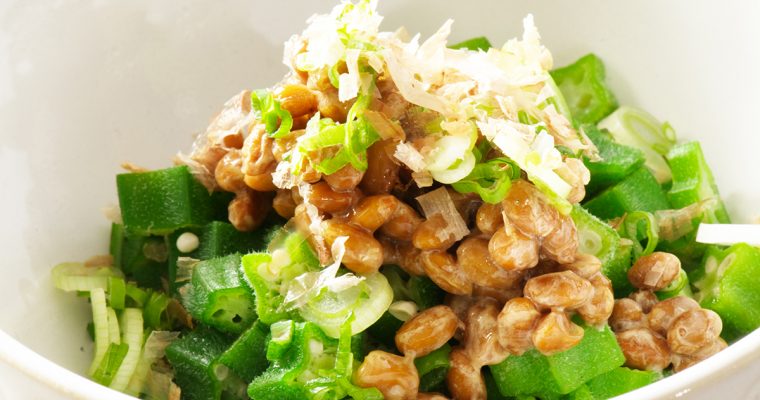 Today we’re really going to put the funky in Funky Asian Kitchen. Okra Natto is a mashup I made from two beloved Japanese dishes. It’s an acquired taste for sure, but we wouldn’t be living up to our name if we didn’t challenge you on read more 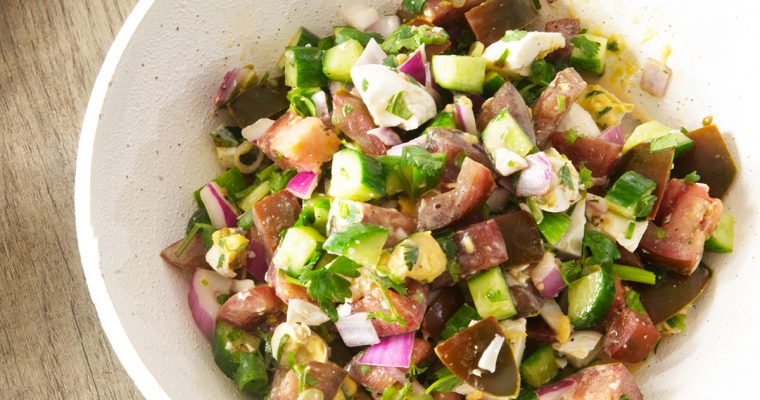 The funk of salted eggs, long a beloved Asian flavor, is finally catching on here in the states, and I am here for it!  If you are not familiar with this trendy ingredient, my Salted Egg Salad is a perfect place to start. This is read more 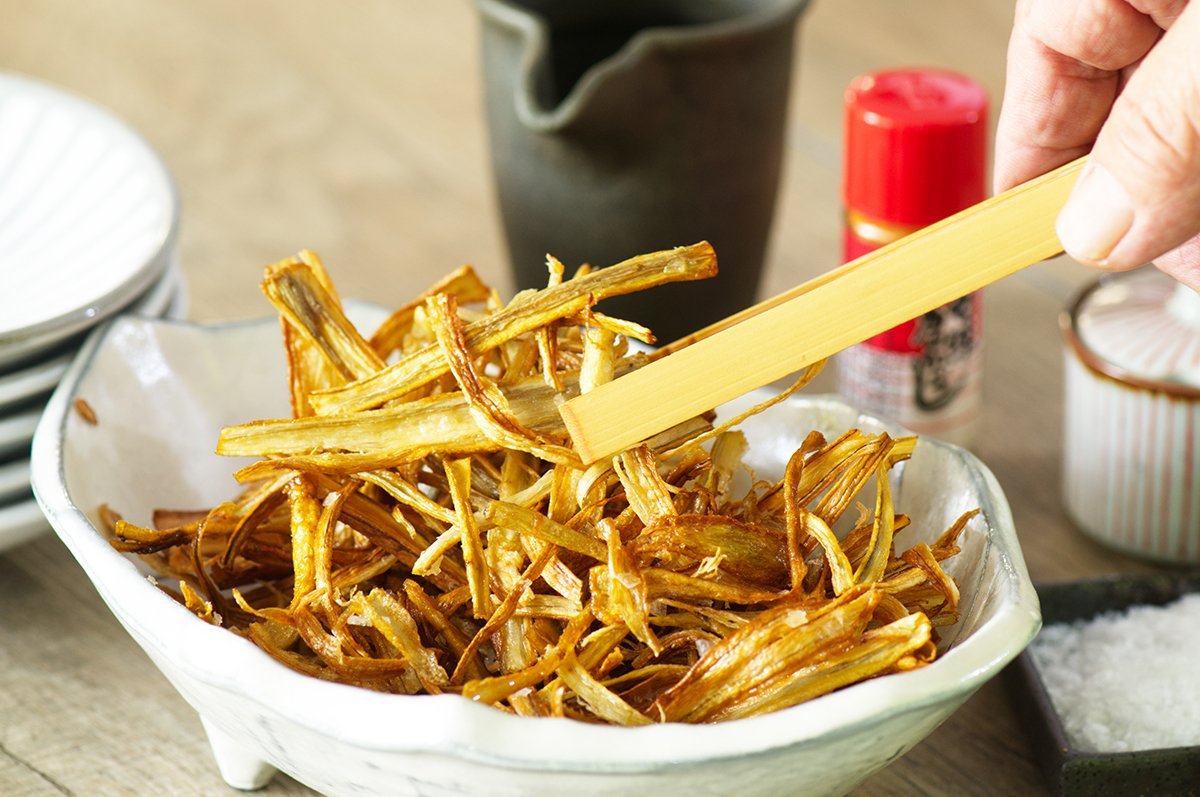 Sometimes you just need a crispy, crunchy snack. Instead of reaching for some overly processed, sodium laden bag of chips, try making a batch of these Burdock Chips. The crunch you crave, with the added bonus of all the nutrition benefits of burdock root. Full of prebiotic fiber and antioxidants and other anti-cancer properties, burdock root has been used for centuries to treat blood sugar issues. But you won’t think about that when you are grabbing another handful of these delightfully crispy chips. Making chips is a great way to introduce a veggie you may not have tried before, so let’s get into it. Burdock is a long and skinny root vegetable, with a skin that’s similar to ginger’s. It’s best to scrape it off rather than using a peeler. I use the back of a knife, which is just sharp enough to take the skin off quickly. It’s important to have the vinegar water bath ready since the burdock root will start to oxidize and brown immediately. Soaking the root in a vinegar-water bath will help to keep it from discoloring. You can cut the burdock using a couple of different methods. I used a knife and first sliced a thin sliver off of the log to stabilize the burdock root and to keep it from rolling around on the cutting board. Then it’s just a matter of slicing the burdock root as thinly as possibly. It’s important to try and keep the slices uniform so that they fry evenly. You do not want some chips to burn before the others are done frying.

If you prefer to use a peeler to get the thin strips, do not cut the burdock into logs. Instead, scrape off the skin 4 inches at a time and then hold the burdock over the bowl of water and peel long strips into the vinegar water. These fry quickly, and in only one inch of oil. So it’s a great recipe to get more comfortable with frying. Also, the burdock flavors the frying oil and gives it a warm nutty flavor. Don’t throw out the oil! Use it for all of your cooking throughout the week. The mild flavor won’t clash with any other flavors. When you first add the burdock root, the oil will bubble like crazy. But as the chips continue to fry, more of the the water from the burdock root will cook out and evaporate and there will be less bubbling. Keep frying until there are very few bubbles, which is a sign that the chips will be crispy. When the burdock chips are nicely browned and crisped, I remove them to a paper towel lined plate and salt them. I like a good, flakey salt for this. Repeat this with the rest of the burdock root until you have a lovely pile of crunchy chips. There’s no shame in just devouring these on the couch. But, they also make an excellent side/topping. Try them with:

When you enjoy these burdock chips, take a moment to let me know what you think. Rate and comment on the recipe below, and don’t forget to tag us in your pics @funkyasiankitchen, we love hearing from you!